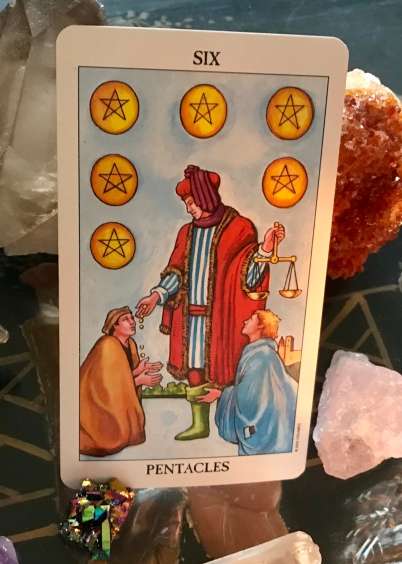 A man in wealthy garb holds a scale in one hand while he tosses coins to a beggar kneeling at his side from his other hand. Another beggar kneels at the man’s other side hoping for a handout. Six golden coins or pentacles dot a light blue sky as if to remind us that wealth can be heaven sent and as so is part of the universal exchange of abundance.

The scales seem to point to sharing resources judiciously. This week we grapple with questions of charity and the choices that come with the distribution of wealth. When do we give? How much do we give? To whom do we give? Pentacles in tarot refer to the element of earth so we are dealing with material things, wealth, finance. Sixes in tarot numerology have to do with the resolution of the conflict or change that has occurred in the previous five card. We might remember that the Five of Pentacles shows two beggars wandering desperately in a snowstorm oblivious to the golden light of the stained glass windows in a nearby church. The situation has changed for the better in the Six of Pentacles as the two beggars have met a generous man of means.

We are guided by an inner light to share resources of all kinds, not just coins. The exchange between giver and receiver creates a balance of energy flow. Whether beggar or wealthy man, it is important to remember that the universe’s source will never dry up. It is fed by our belief in abundance and actions of love. Seek the light.

View all posts by spiritedtarot